This is part one of a three part series.

Recently I attended a memory forensics workshop where I refreshed my Volatility skills. When I returned my coworkers asked me to give a tutorial on how Volatility worked and explain the basics of computer forensics.

I was happy to oblige, planned a 3 session tutorial, created slides and planned to do some hands on after each presentation. For memory forensics on Windows systems I could reuse the training material from the workshop, but to also cover the Linux side of things I needed to create some memory dumps on my own.

Since Debian is the stock-disto at work and Debian Stretch is going to be released soon I made sure everything worked on the 4.7 kernel shipped with Stretch in December. The LiME DKMS built just fine, also creating a matching Volatility profile was trivial, and Volatility gladly (after resolving a minor issue) told me everything I wanted to know about the memory image.

Fast forward two weeks, just before the first tutorial was to take place: I installed a fresh Debian Stretch VM, took an image of the memory and created a new profile, since the linux-image-amd64 had just been upgraded to Linux 4.8. When I fired up Volatility to give me the process list all I got was No suitable address space mapping found. Damned.

I had a look at the open issues in the Volatility Github repository and the Debian maintainer of the Volatility package had similar problems, alas with kernels < 4.8.

At this point I want to summarize the research I did regarding the issue and give you a primer on amd64 memory address translation, Address Space Layout Randomization (ASLR), a Linux feature called Kernel Identity Paging and how Volatility validates profiles/address spaces when used with memory images acquired on Linux systems.

On modern platforms you have virtual addresses (VA) that can be translated to physical addresses (PA) in RAM by the Memory Management Unit (MMU). The input for the MMU is the value of the CPU register CR3 and a virtual address (also called linear address) which in case of amd64 is 64 bit long. From these 64 bits only 48 bit are relevant as of now but Linux kernel infrastucture is currently adapted to utilize all 64 bits. But I’ll only focus on the current 4 level paging MMUs for this topic.

An example translation is illustrated for virtual address 0xFFFFFFFF81C0EB58. The DTB is 0x1C07000. Note that little endian order for entries in tables is used and that a binary translation is required.

This is a CPU register that contains a 64 bit value. Bits [51:12] point to the physical address of the page map. The value of CR3 is also called the Directory Table Base (DTB) and is individual for each process. 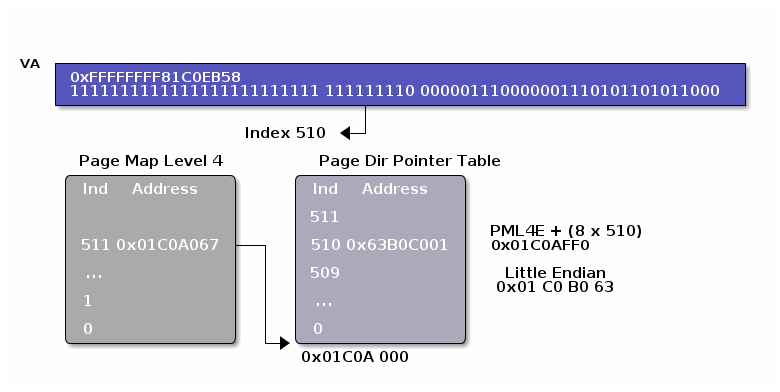 Within the page data is read starting from offset, where offset is va[11:0] 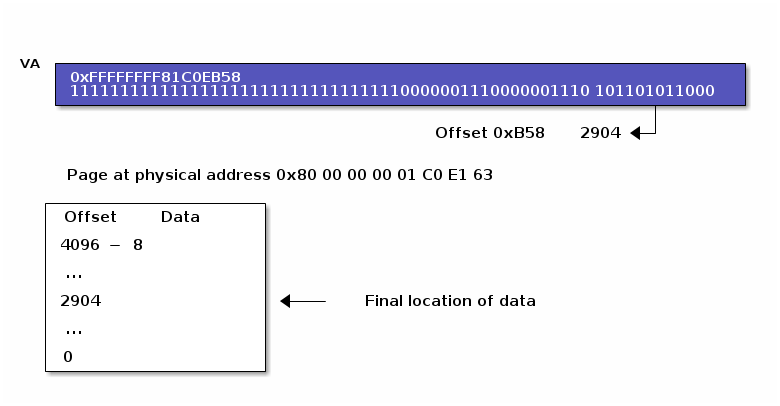 After the introduction of Non-Executable pages, exploits could no longer rely on injection of shell code into memory regions designated to hold only data to achieve arbitrary code execution. To work around this restriction, they could utilize return-oriented-programming, i.e. using already loaded executable sections and rearranging their order/parameters in a way that they still got what they wanted. When I was young, ROP was quite easy, since memory addresses for data and code segments of ELF binaries as well as their heap etc. where static. Thus if someone found a buffer overlow in your program, he would know which jump targets would be worthwile to redirect the program flow to. In order to mitigate this ASLR was invented (even though originally only as a short-lived temporary measure). When a binary is compiled with ASLR support the addresses where a certain function is located at run time can change each time the program is loaded. ASLR makes it more difficult to reliably exploit vulnerabilties in a way that doesn’t crash the application, since an attacker does no longer immediately know the addresses of the functions that he wants to return to, and thus a tampered instruction pointer might not point to a valid entry point of a function but somewhere else.

Why is this relevant here? Well, in kernel version 3.14 Linux introduced ASLR not only for user space applications but also for the kernel itself. So when booting, some entropy is generated and all the kernel symbols that were at a static locations before (as written down in the holy /boot/System.map) could now be almost anywhere in the virtual or physical address space. So the function for KASLR prior to kernel 4.8 was basically:

So if an attacker wanted to utilize a VA in System.map to determine the location of a worthwile jump target he would not be able to do so trivially if he didn’t know r. It is important to note that until 4.8 the same r was used for VA as well as for PA. This has something to do with kernel identity paging, which I’ll explain in a bit. Moreover the relative positions of various functions etc. defined in System.map don’t change, i.e.:

This mechanism is leveraged by Volatility to validate the LinuxAMD64AddressSpace and in case of pre-4.8 KASLR to easily figure out the random offset.

In order to succesfully work on a memory image, Volatility requires a profile for the operating system from which the image was acquired. A profile consists of 2 files:

The dwarf file lets Volatility for example figure out at which offset from the start of a process struct (task_struct) the PID or process name is stored.

As discussed before, a DTB is required to resolve virtual addresses to physical ones. To get a complete overview of the memory image, Volatility tries to determine the kernel DTB, aka the DTB of the process with PID 0. Once that DTB is determined all other processes and their DTBs can easily be figured out, since all processes are stored in a double linked list which can be traversed easily once you have an entry point.

Let’s have a look at the code that tries to find this DTB, when the kernel is not relocated/KASLRed:

This works quite well if KASLR or kernel relocation is not involved. In case this doesn’t work, Volatility searches for a needle in the haystack:

So far so good. If Volatility succesfully found a DTB it will then try to validate its findings. If no KASLR shift was found it basically does this:

If a KASLR shift was found it will add this shift accordingly, again validating that identity paging is in place.

If the identity paging check fails, the address space is considered invalid.

Back to my problem

So basically I had the problem that for my memory image either the DTB was not correctly determined or that the identity paging property did not hold true. Of course I also considered that the profile I built was incorrect and rebuilt it, making sure I was using the matching System.map and dwarf file, but to no avail.

I acquired another memory dump and let the system up and running, retrieving the virtual address shift by comparing the addresses in System.map with those in /proc/kallsyms and tried passing that shift to Volatility with the according option. But again: no luck. I then turned of KASLR by passing the nokaslr kernel option on the command line, and was pleased that with the memory acquired afterwards Volatility would play just fine (though at that time only with images in LiME format and not in raw format, but this was an [issue][lime-timeout] during acquisition as I later found out).

I concluded that my profile was just fine, and that I must be missing something else. After digging through the kernel change log, Kees Cook’s blog and LWN I finally found the issue: The KASLR shift for PAs and VAs was no longer identical.

Take this gif as a gift which gives an overview of KASLR evolution: